mountains out of molehills ...

did you see the bruh-ha-ha about the gap kids ad this past week?  four cute girls (two of them more flexible than i will ever be!) advertising a new line of clothing. 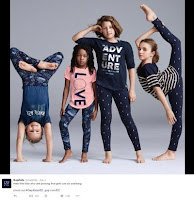 four young girls that blew up the internet and probably don't even understand why.

a beautiful girl wearing a t-shirt that said "Love," and all it caused was a backlash of hate, anger, and resentment.

as if the position of a girl's arm dictates the status in society of another.

some people just have too much negativity on their minds, and make mountains out of molehills.

if they spent as much time thinking of ways to end hunger, homelessness, or poverty as they think of ways to spread hate and negativity, this world would be a much better place.

the majority people looked at that ad (myself included) and probably thought "cute kids in cute clothes" and nothing more.

but there were a few who looked at it and thought it was racist ...

why do we let the insecure, paranoid, and negative minority in this country dictate how we see the world?

some of my best friends had a darker shade of skin than i did.  some of the world's greatest philosophers, artists, musicians, inventors, doctors, and religious leaders have had varying shades of skin.  did the color of their skin make their contribution to civilization any less?