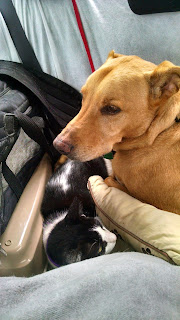 he has been gone a week now
i'm still not used to the emptiness in the house
or the space on the bed
it hits me at times, unexpected, like an earthquake
followed by wave after wave of grief and tears

loud noises, thunder, fireworks
he would shake and lean into us
tonight while washing dishes,
i dropped a handful of silverware into the sink
i turned to tell him it was alright, it was just me making noise
instead, i had to bite my tongue to keep my sobs from escaping