Today was my last day, and I could have come down with a case of short-timer. But one thing I've learned in my work career is that sometimes how you leave a job says more about who you are as an employee than your resume or references can.

She'd had the "Help Wanted" sign in the window for months, but hadn't gotten any applicants serious about working. Some people came in and expressed an interest in learning how to prepare tax returns, but when they saw the three-inch thick tax law book to read and learn from they didn't come back. They wanted a paycheck but weren't willing to put in the effort to earn it. So it was just her, answering the phones, greeting walk-ins, scheduling appointments, and preparing tax returns.

Until I stopped in one afternoon in mid-January and asked what kind of help they were looking for. I knew, and she knew, that it wasn't going to be permanent or full-time. She said that she couldn't offer me what my resume and experience said I was worth, and I told her it didn't matter. "Worth" is a relative term. When you have zero income it doesn't matter whether or not the pay is what you made in the past or what those letters behind your name cost you. A little money pays bills just as easy as a lotta money.

She was hoping I would be able to stick it out for the long run when she planned to purchase the franchise and offer me the Office Manager position that was one of the hats she currently wore. It would never be a full-time 40-hour a week job, and the money wouldn't be what I made before the economy and jobs flipped in 2008. But it would be a job and an income.

I started work armed with initiative and too many months of looking for a job to just sit idly by and watch the clock tick off the hours until I could go home.  I emptied the clutter in the storage closet, organized it, throwing out what was trash, sorting what were keepers, and moving the excess IT supplies to another shelf unit so they could be tested and resourced.

My days were spent shredding old documents, emptying trash, cleaning floors and windows. I took apart the vacuum, washed the filters and dust container, and cleared the clogged hose. The two lonely magazines from 2012 in the lobby met with the recycler and I went online to order several free subscriptions for the office. The bathroom was scrubbed down, and a filing cabinet full of disorganized desk supplies became organized.

I had learned about work ethics from watching my Dad when he retired from the military and became a carpenter. If you had a job to do, he told me, do it right the first time so that you aren't wasting your time, materials, and energy later having to re-do what laziness did the first time around. He told me to treat every job like I owned the company, and everyone I met from the top to the bottom with respect. Especially the customers. They might not literally sign my paychecks, but without them, I wouldn't get a paycheck. 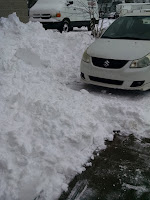 Those were the lessons I tried to pass on to my students when I was teaching university level management courses. As a manager, if you want employees to respect you and love their job, they need to be respected and know that they can take ownership of what they do. If they see a more efficient way of doing something, a good manager will be open to new ideas and two-way communication.

Unfortunately, I've had more than one manager who could have taken lessons in communication and Continuous Process Improvement. I'm not proud of the fact that some of those managers highly influenced my decisions to leave rather than continue to try to find ways to communicate. There is only so much you can say to someone who is unwilling to listen.

When you don't have a job, it is hard to find one. In less than a year I filled out more than 278 applications. When you have a job, however, sometimes new opportunities fall into your lap.

She knew what was coming when I told her I needed to talk to her about something. She wasn't surprised. The money and hours were better than what she could offer me, now or when she owns it. As tempting as the increase in pay was to start immediately, I gave her a two-week notice because I knew tax season was her busiest time. She had finally been able to train and hire another person for tax prep and I felt less guilty about leaving. 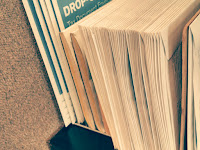 Today, my last day, I shoveled snow and iced the walk (because of a momentary lapse of sanity that made me leave Florida in 2014 and take a job in the north). I made coffee using some of the filters I brought from home because she only had one left and I knew wouldn't have time to shop for more until the weekend. I printed client forms and got packages ready so she wouldn't have to worry about getting them done for a few weeks. 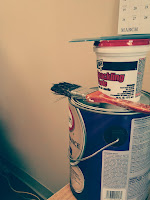 I cleaned off the loose hair that had found its way from my head to my desk chair (and wondered why I wasn't bald or if I had a bald spot I hadn't seen yet) because, eww! No one likes to sit on a chair with a bunch of someone else's hair on it.

I patched and painted over the scuff mark on the wall where the back of my desk chair had rubbed a black mark and bubbled the paint.  I vacuumed the office, and then vacuumed again after lunch when my boots tracked in ice salt. I emptied the vacuum dust container, bagged all the trash and took it to the dumpster. I ran a damp mop over the entry tiles to clean up the melted snow and salt residue, and also in the bathroom where dirty, slushy snow had melted off boots during the week. 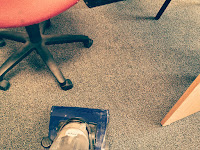 From my first day at work to my last day, I took responsibility for my job and what I did. Unfortunately, that isn't a course offered in a school or university. It is a life lesson. It is an example that you have to see ... and want to be.

What examples are you setting in your life? What lessons are you teaching others?
1 comment: