Suddenly, Cierra heard a man laughing.  It was Riku's laugh!  Throwing all caution to the wind, she began running through the woods toward the sound of his laughter.

Riku had been holding his breath so long as the sound became closer and closer that he had started to feel lightheaded.  When he finally saw what had been making the noise he was so relieved, and amused, he began laughing. 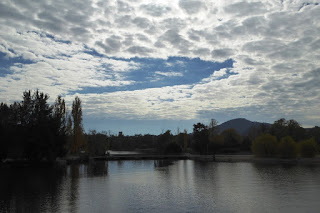 A pair of adult Canadian geese, following by at least two dozen goslings and another pair of adults came trudging out of the woods towards the lake as the sun was beginning to rise.

His laughter was cut short when he heard something larger and louder running through the woods.  Stepping behind a tree, he looked towards the sound.

Cierra burst through the trees and brush, her hair in her face with twigs and leaves everywhere.  Frantically she looked left and right, wondering whether or not her fear and imagination had made her hear things.

Riku couldn't believe his eyes.  A part of him had not believed she would show, or even that she would remember where they had first held hands.  He stepped out from behind the tree.

Movement to her right caught her eye and Cierra turned.  Their eyes locked, then they both were running towards each other.
5 comments:

Cierra picked her way between the trees in the dark mostly by feel, and using the light of the moon whenever the clouds cleared.  The sound of the loon on the lake was beginning to get on her nerves and she had visions of old horror movies set in summer camps.  She was always the one who covered her eyes during the scary parts and screamed "No, no, what are you thinking?!?! Don't go into the woods alone!!!! The killer is hiding behind that tree!!!"  Now here she was doing everything she screamed about at the movies.

She wished she was back at home, sleeping in her own bed and would wake up to find this had all been a nightmare.  She couldn't believe she had thought this would be a good idea, especially at night, in a snow storm.  It would be summer by the time they found her corpse, frozen against a tree at the edge of the lake, her fingers chewed off by hungry chipmunks, her eyes pecked out by starving woodpeckers, and her lips and nose eaten by rabid porcupines.

Cierra stopped next to a large pine as the sound of a branch breaking near her startled her out of her fear fed imaginings.

~*~
Riku stood at the sound and turned towards the woods.  It was pitch black as the clouds had moved in front of the moon again.  He wanted it to be Cierra.  He wanted to believe she had not forgotten him.

The loon had suddenly become silent.  A silence that was unnerving.

Taking a quiet step backwards, Riku reached for a piece of burnt, broken wood from last summer's campfire.  He didn't have anything to light it, but it had occurred to him that the bears would be just waking up from their hibernation.  Still groggy sows could possibly have cubs with them, and would be aggressively protective.  He wondered if trying to find some place to get undercover would be a good idea, but then he didn't want to look like a frightened child if it was Cierra.
~*~
Cierra closed her eyes, trying to keep her composure and not scream in the darkness.  She felt foolish.  Terrified and foolish.  She was a grown woman, not a 15 year-old girl.  Trying to think of something less frightening to calm herself, Cierra thought back to the first time she and Riku held hands.
~*~
They had been kayaking on the lake and as the sun began to dip lower in the sky, they stopped to watch the swallows zig-zagging over the lake catching bugs.  Riku reached over to pull her kayak closer to his when the wind momentarily picked up and pushed her away, and as she reached out to grab his kayak, their hands met in the middle.  Neither of them said anything, nor did they let go.  They watched as the sky faded to black, the Milky Way and falling stars lighting up the night, and for just a moment they felt like there was no one else in the universe except them.

In the years since that night, they had taken many voyages together, both on and over the water.  But it was that night when they held hands in the dark that Cierra had given him her heart.  When she got back to her cabin, she had pulled her diary out from under her bunk mattress where she had hidden it and in large bold letters she put the date on the top of a clean page and wrote...
TONIGHT I MET MY SAMURAI
~*~
Separated by darkness, not knowing that the other was out there, both of them were frozen in place as the sound of another branch breaking broke the silence.
6 comments:

Riku watched her from a corner booth on the far side of the coffee shop.  It had taken him nearly a month to get all of his paperwork and passport to cross the Canadian border, and another to make his way to Wisconsin.  A trucker had given him a ride all the way across Minnesota and he had been sitting in the coffee shop trying to decide what to do next when he saw her walk in.

He watched as she ordered coffee and asked for a menu, trying to decide if approaching her now would be a good idea, or if she would completely freak out.  Just because she had left his voice on the answering machine didn't mean that she hadn't started to move on.  He didn't even know if she still used that phone number or not.  It could have been an old cell number that she never bothered to use anymore.

She placed her order for soup and a sandwich then pulled out a phone and made a call to someone.  Riku listened to her laughter as she made plans to see a movie over the weekend with the person at the other end.  It didn't sound like she was grieving, or even missing him.  Maybe coming back from the dead right now was a bad idea.  Maybe she had moved on.

He continued to watch and listen as she made other calls, laughing occasionally.  There had to be a way to know if she still thought of him.  When she asked for the check and got up to use the restroom, he knew what he had to do.

~*~
Cierra stood on one leg and pushed the toilet lever gently with her other boot.  She didn't know how much longer she could shallow breathe without passing out.  As soon as she had walked into the ladies room she could smell the scented poison that occasionally spritzed out of a battery operated device mounted on the wall over the door.  Its fragrance was supposed to hide the underlying scent of seldom cleaned floors, bleach, old grease, and urine that the central air was pulling through the vents between the men's room next door and the kitchen on the other side.  Why hadn't she done what her mother always told her to do before ordering at a restaurant?

"Trust me, Cierra.  Always use the ladies room immediately after you walk in before you even get a table and order at a restaurant.  If the bathroom is nasty, you can be sure the kitchen and oven are nasty too.  You'll save yourself a lot of discomforts if you do that every time you eat out."
~*~
After paying for her meal, Riku walked out into the sunshine that was quickly being covered by dark snow clouds.  He saw a trucker heading toward the exit and quickly ran to ask if he could give him a ride just five miles down the highway.  The driver waved him in, and he ran around to the passenger door and climbed in.

"Dang if it ain't getting cold out there!  You sure you just want me to drop you off at five miles?  Ain't nuthin' out there but forest roads."
"Well, I'm actually going to a camp that's up another five miles into the forest."
"The YCC camp up there on the Nicolet?"
"Yes!  Are you familiar with it?"
"Heck yeah!  Best summers of my childhood were spent there!  I'll take you all the way up there, it'll be great to see that place again.  Reach in back there and grab that eagle feather hanging on that leather strap and I'll tell you all about how I earned it my last summer there.  I was 14 years old and just a skinny lil' kid..."
~*~
Cierra pushed forward in the snow up the road.  She had swerved onto the shoulder to miss the back end of a semi truck coming down that had been hogging most of the road.  He'd been trying to avoid getting sucked off the road since the recent rains and now the snow was making the shoulders soft and rotten.  Instead, Cierra had gotten sucked into the boggy shoulder.  The trucker hadn't even slowed down, and probably hadn't even realized she'd been run off the road.  Now she was walking the last mile, feeling more and more dubious and that she should just go back to the warmth of her truck cab and wait out the storm there.
~*~
It was dark in the campground when Riku got there.  In four months it would be filled with screaming and laughing kids, running everywhere until they finally ran out of steam.  He cleared a spot on top of one of the picnic benches, and sat down, watching the reflection of the moon on the lake, and listening to the mournful call of a loon.  The snow was lightly falling now as the sudden storm was moving off and sounds in the forest were still muffled.  He felt himself becoming the old Riku again as memories of his summers began flowing back again.  Summers.  Cierra.  University. Their wedding.  His family and friends.  As the memories came back, his tears started to fall and before he knew what was happening, he was wracked with hard sobs for all he had missed in the past eight years.

Suddenly, he heard a branch break behind him.
5 comments: